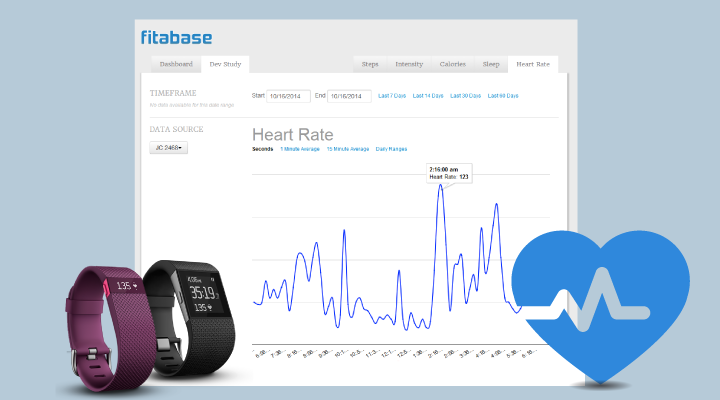 After two years of customer-driven features and enhancements, Fitabase is officially coming out of beta with immediate support for heart rate monitoring and auto sleep detection from the just announced Fitbit Charge HR and Surge. These new devices announced by Fitbit offer continuous heart rate monitoring, marking a turning point in energy expenditure objective measurement tools available to researchers. “We’re excited about the potential for researchers to run long observance studies using an even better data set for energy expenditure and MVPA level,” says Small Steps Labs founder Aaron Coleman. “We are pleased to announce Day 0 support for heart rate and automatic sleep time detection in Fitabase.” Starting today Fitabase data reports, alerts, and export tools support the just announced heart rate and auto sleep detection in addition to all the current physical activity and sleep data that have been available during the beta period.

“Fitabase facilitates a new kind of connected research model,” says Coleman, a former employee at the UC San Diego Center for Wireless Population & Population Health Systems. “Researchers are increasingly looking to gather data in real time, and are adapting and personalizing their interventions. Fitabase makes working with hundreds or thousands of participants manageable and has all the data ready to export at any moment for our customers to do their analyses.” Heart rate data tools are being announced today in connection with the release of Fitbit models Charge HR and Surge. “We're very grateful to our friends at Fitbit who have continuously supported Fitabase. The coordination helps us provide the best service to our customers and today it means we were able to build tooling for the new heart rate enabled models."

Coleman started Small Steps Labs to create Fitabase after noticing the limitations of collecting measures using traditional research devices where data is only available once the devices have been returned by participants. Fitabase was recently featured in a report by the California Institute for Telecommunications and Information Technology(Calit2) supported by the Robert Wood Johnson Foundation highlighting Fitabase as an example of new technology catering to the needs of the research community. The same report indicated that 89% of researchers surveyed agreed or strongly agreed that self-tracking data would be useful in their own research, and 95% of respondents stated that this kind of data could answer questions that other data could not.

In comparison to the traditional offline actigraphy tools that have long dominated physical activity research, Fitbits have proven to be surprisingly accurate and a recent validation study by researcher Jung Min Lee at Iowa State showed that both models tested, the Fitbit Zip and Fitbit One, had fewer error rates of energy classification than even the current “gold standard” device made by Actigraph.

Today Fitabase is also announcing support for the Fitbit Aria scale. As for the future, Coleman says, “We plan to introduce support for additional consumer devices and some mobile tooling allowing researchers to design adaptive studies which tailor to participants. We think dynamic, connected, and contextually aware research modeling is the future.”