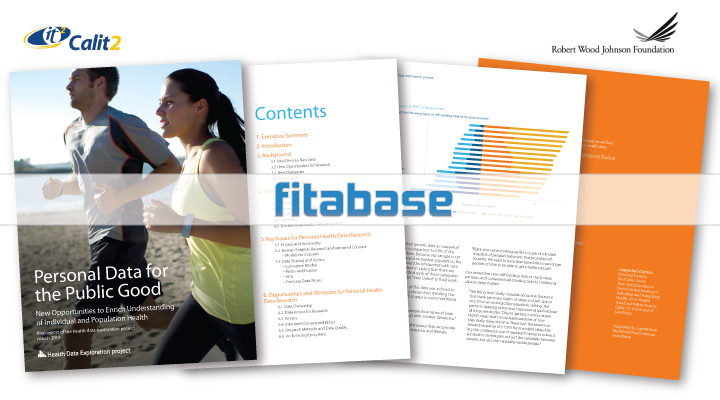 A new report from the California Institute for Telecommunications and Information Technology (Calit2), supported by the Robert Wood Johnson Foundation, highlights Fitabase by Small Steps Labs as an example of new technology catering to the needs of the research community now utilizing personal data collection devices like the Fitbit.

Additional approaches that can address this issue appear to be emerging. One is signaled in what we found with one company, Small Steps Labs, whose business model is to serve as an intermediary between a data rich company, in this case Fitbit, and academic researchers via a “preferred status” API held by the company. Researchers pay Small Steps Labs for this access as well as other enhancements that they might want.

Of note the report, which interviewed 134 researchers showed an overwhelming interest by this community for self-tracked data:

Researchers in our survey were generally enthusiastic about the potential for using self tracking data in their research, with 89% agreeing or strongly agreeing that self-tracking data will be useful in their own research, and 95% saying that this kind of data could answer questions that other data couldn’t.

When asked about the potential impact on research by Tiffany Fox from Calit2, lead author Dr. Kevin Patrick responded:

The amount of data captured by these devices and apps dwarfs anything that we have ever had before. New computational and analytical strategies will need to be applied that have not commonly been used in health-related research.

The report serves as both a validation of the vision for Fitabase and also highlights the importance and attention to detail around privacy and handling of this kind of data. For the full report see:

For additional info about Fitabase for your current or future research email us at hello@smallstepslabs.com